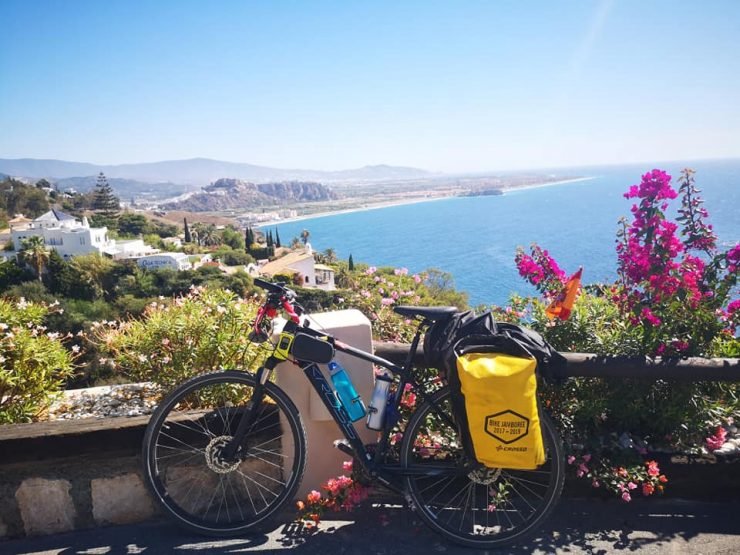 Bike Jamboree after traveling almost all over the world came back to the old continent! And here we are

😀 Together we managed to meet only the day before the start of the stage but it did not prevent us from taking a unanimous decision and organized actions under the code name “take over the baton”. Offensive activities for this purpose took place in Gibraltar – the overseas territory of Great Britain, which has long served as a defense point of Europe – the struggles first lasted under the characteristic Rock of Gibraltar, and after regrouping the ranks at Europa Point at the General Sikorski Monument. There you finally took the ralay stick and relay bikes @Kross – stage 33 was triumphing, stage 32 was looking longingly at Africa 😊
However, before it happened, some of us had the opportunity to enjoy Spain a few days earlier. Rest of our group could have a taste of the beauty of this country thanks to the wonderful photos passed in stages by Marzena and Ania, who rested and enjoyed their senses before the trip to beautiful Seville. Kevin and Maciej in turn came to Tarifa where they enjoyed the hospitality @High spirit kitesurf for which we thank you very much! Speaking of thank you, we would like to send all of us to the @Tomasz Zakrzewicz and his @Cycle Center in Gibraltar with all our heart. Tomek, who, despite the fact that he did not know us earlier, agreed to accept our mega parcel with the equipment to his bike point, which more often offered to fold the sent bike and re-service, all those that will come from Morocco

<3 this is not the end – Tomek was helpful at every turn and in every unexpected twist. It is impossible to describe how much he did for us and how grateful we are to him. If you ever visit Gibraltar, be sure to visit him because, apart from the fact that he has a well-equipped shop and bicycle workshop, he also has a big heart and a lot of enthusiasm . Thanks again! We cannot forget about thanks to @ Miłosz Bączkowski and the company @Yamoo, which was very involved in organizing the shipment of all our equipment to Gibraltar. Our journey has not yet begun, and we are already experiencing that we cannot do much without the help of another person. Isn’t that wonderful?

<3
But we are here! Managed to! Hot Spain is waiting 🚵‍♀️🚵‍♂️
and … meanwhile, our common room looks like one big battlefield

😀 7 people, 7 bicycles, mass of luggage in one room, and in the air you can feel great excitement at the thought of the waiting route and the adventures associated with it.
Especially since Spain turned out to be much more exotic than we expected and not only due to tropical vegetation, captivating architecture (ornamented, with charming fountains in internal patios and ubiquitous, colorful, ceramic tiles) and romantic streets but also due to the fact that despite the large number of tourists, most people working in this area do not speak English at all so you can feel as if you were in a far more remote corner of the world than Europe. The Spaniards delighted us with their openness and energy for life . A large dose of sunshine and afternoon siestas are probably one of the main factors in the style of life of the local population. On the day of our stay in Algeciras there was a match between two teams from the capital of Spain – Atletico Madrid vs Real Madrid. The pubs were full of die-hard football fans who are like religion to them. Emotions reached the zenith 😉Spain are very open in interpersonal contacts. When paying for shopping in the store, people are not limited to good morning and often have much longer conversations, so be patient while queuing. On the streets, it’s not difficult to exchange a smile with a random person and a warm “¡hola¡” ☺️. The picturesque streets in Spain are full of life (unless it’s just a siesta). People sit on chairs in front of their homes and are happy to talk to neighbors … More news soon! Let’s go!