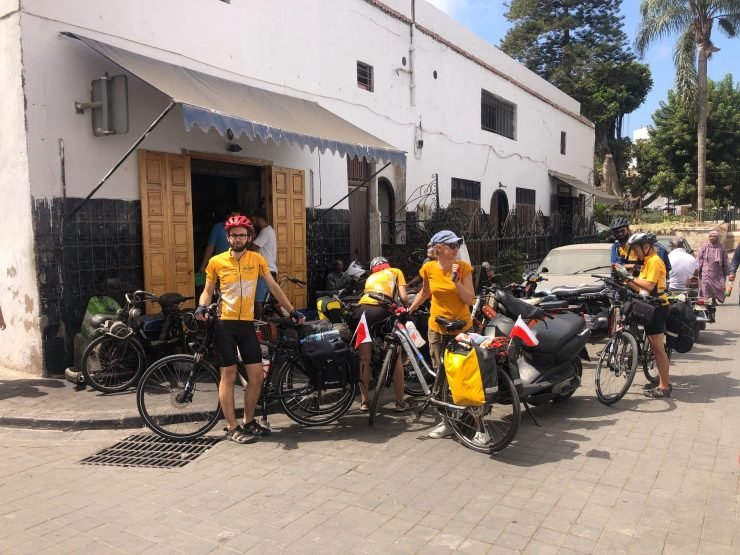 Bingo! This is what I think about hotel Centra

When you sat at atrium, you can feel smell a harbour city like Casablanca. Tommorrow we don’t move at morning. We have a lot things to do. 3 #Kross bikes need repair, we have to send back Staff that we borrow from stage 31, when Tom’s luggage wander across Europe . We also should wrote about our adventures. Before this, we find a moment for rest on roof nice restaurant with view on harbour and city.

Our stage is not very relaxing, but the most difficult – the Rif Mountains – is ahead of us. So we wanted to take a bit by train to gather strength for the Moroccan streamers waiting for us. Unfortunately, the first information collected by Tom in Settat was confirmed in Casablanca. You won’t get on the train with your bike just like in our PKP. You must pack it and give it as baggage. This information was a big surprise for us, especially since Morocco is really a cycling country. Anyway, two wheels can be easily thrown into a bus or taxi, which Asia and Marcin checked one day. However, trains are inaccessible to cyclists, which is why we change our plans and from Rabat we catch a bus to Meknes – one of the imperial cities of Morocco.

Ocean
We leave late – at 13. Unfortunately not everything goes our way. Sending excess baggage to Spain is too expensive, which is why we take it with us on our journey. So we split the excess equipment evenly and pack into our #crosso panniers.

KROSS goes better with bikes. I visit a nearby workshop where a Moroccan tries to inflate the wheel with a rubber tube. So I give him my presta-schreder adapter. He will probably serve him for years, and I finally have 3 more

After settling all matters we leave with relief from the four million Casablanca – the crowds of this city did not appeal to us. From the city we go along the ocean road, but unfortunately we are not accompanied by the view of the waves. Interestingly, there are no grazed villas above the water, but favelas.

Fortunately, the farther the better. With each subsequent kilometer traffic decreases, from time to time the ocean appears to us. Favelas give way to closed estates with swimming pools, gyms and bodyguards. We also hit the first bike path. It’s nice, but at intersections with the street we have to get off the bikes, because the curbs are too high. We must finally watch out for our Krossy Trans 10.0;) The monotony of driving on the path is interrupted by a flock of sheep who are trying to cross the road. We definitely did not expect to see dozens of sheep that create a confusion in the middle of the road! So we take out cameras to capture this moment, and Marcin saves one member of the herd from leaving when she cannot jump over the wall.
We decide to end the day in Bouznika. The area is very nice, and we manage to find the perfect accommodation – a beach house. In the last rays of the sun together we make the dream of departure come true – we immerse ourselves in the waves of the Atlantic Ocean …

The bridge that is not there.
We start the day with scrambled eggs. There would be no equipment from Primus Equipment. Light clouds float in the sky, which promise perfect weather. By common decision we choose the path that we will bypass the center of Rabat. Our goal is to get away from the hustle and bustle of the cities and get to the mountains as soon as possible, so after skipping Rabat we plan to catch a foot in Mekness. Before this happens, however, we will pass by the king’s multi-hectare estate, surrounded by a lot of guards who are happy to salute us. The outskirts of Rabat are a world of contrast. At one of the intersections, a little boy steals the Polish flag from us. He ran out of the favela in the blink of an eye and quickly disappeared into their abyss. A block away at the intersection the police are already standing, which is repeated until the end of the city. Buildings are changing. Favelas give way to blocks, and then to villas. We also pass diplomatic districts with many embassies. Unfortunately, we fail to spot our Polish one. Departure from Rabat is crowned by a wonderful descent and a lake with a thousand storks. We are experiencing an amazing show when, at one moment, they take flight to circulate above our heads and slowly rise up in a spiral movement. Literally a kilometer away another attraction awaits us – a bridge that is not there. Google Maps and the ones we have on our phone do not give a chance for a river crossing. Tomek, our stage navigator, convinced us that such a possibility exists. Each of us was right. The bridge was, but for huge sewage pipes with a narrow passage in the middle. There was barely a bike in it, and the stairs led very much upstairs. Fortunately, taking our Kross bikes out of the Crosso panniers and moving them to the other side did not take us much time – we divided the responsibilities and efficiently moved to the other side.

The bridge, however, was not the last attraction;) a moment after jumping on the bikes again, a noble driveway rose ahead of us, which we overcame in a flash on our horses. The end of the driveway is already a small town, where we had a delicious dinner (probably the best so far!) And we went on the main route to catch hitchhiking. We also met a lovable girl on a modern road bike who went for a short afternoon workout

At the first station we talked to a gentleman with a large pickup about the possibility of a ride. When me and Monika – the only person fluent in French in our group – unsuccessfully tried to communicate with a nice gentleman, Adela caught hitchhiking after a minute to Mekness. It helped us a lot, because we have already given up the pickup truck with the language barrier. A driver stopped by Adela, who fortunately knew English and translated from Arabic, helped us. Unfortunately, the gentleman with the pickup did not go to Mekness, but he offered a free ride to the town located 20 km away. Hitchhiking Adela took Asia and Marcin, who were injured, and the rest of us decided to take a short ride. Tomek and Monika chose a place in the cabin, and I with Adela got a pack with bikes. Despite the language barrier, Tomek and Monika managed to convince our driver to take us to Mekness for a fee. Maybe the trip to Pace was not the most comfortable, but Adela and I could enjoy a beautiful sunset and numerous picturesque views. For the night we chose the riad on the outskirts of the old town. Although the road leading to it did not impress, it was definitely the decor of our apartment. We spent the end of the day eating dinner on the terrace overlooking the city. The next day we had a day off