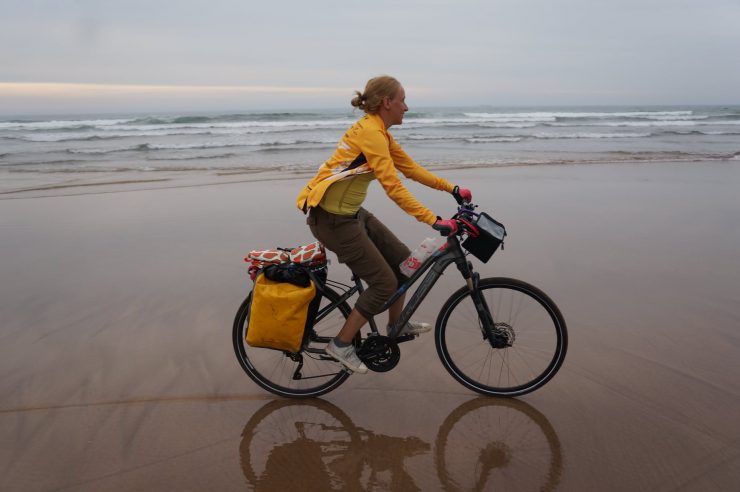 It’s uphill! Morocco is not an enemy, but it clearly shows the conditions here. On the first day of our journey, due to technical issues, including the luggage scandal * we set off a little later. This “slightly” caused that we drove 70 kilometers on Saturday, finishing the route at night at the butcher’s (however, that evening no animal suffered 😉). On Sunday, with burning arms, knees crying in the driveways, tense buttocks and empty stomachs, we arrived in Settat.
In Settach, Tomek received one of those calls, after which one can breathe a sigh of relief. The luggage has arrived in Marrakech!
So on Monday we decided to split up – Tom on a mission set off to Marrakech by train (info for those interested: traveling by train with a bike to Morocco are definitely an option, but the bike must be unfortunately made, as Tomek learned unfortunately at the station), and we hit Casablanca. The plan was to meet at Casa in the evening, which we luckily did. With slight turbulence, but still 🙂

Just before sunset we arrived at the beach and met face to face with the ocean. We expected applause, bows or at least a warm sun, which did not give us a step over the last days. Unfortunately, the weather was not kind this time, the blue sky was hidden behind clouds, and along with the waves a strong wind hit the beach. However, immersing our feet in the ocean was too important for us to give up sunbathing. So we sat down next to the Moroccans playing football and after a moment of rest we began to look for accommodation. We managed to find one hostel, but going to it we found ourselves in the middle of hell – the winding, cramped and overcrowded streets of the medina, where there was simply no place for us. We squeezed between shopping Moroccans, losing someone from the team, once a GPS signal. When we finally got to the hostel we felt that this is not the place where we want to leave our new Kross Trans 10.0 bikes. So we thanked the owners and escaped from the medina. Fortunately, the hotel was waiting for us a few hundred meters …