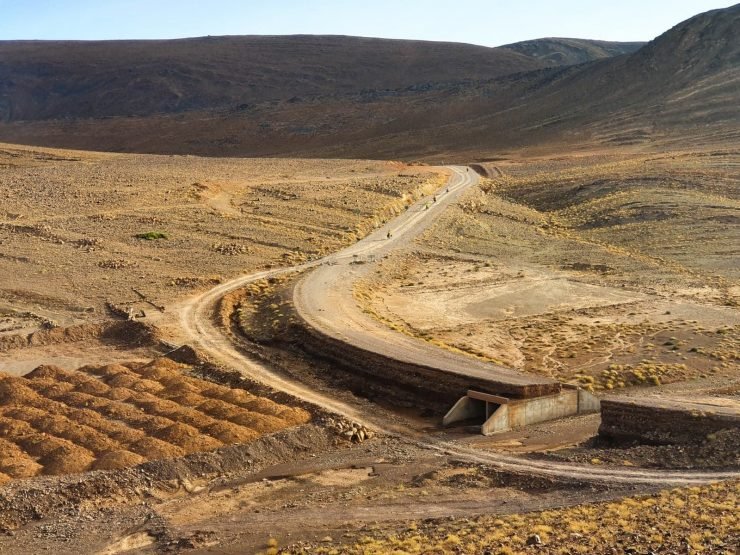 Important news and information from the tour #stage31 !!!
The Afryka Nowaka society’s stage entered the Atlas mountaina and last weekend the team of Zbyszek Sas climbed the highest peak of this range and Morocco – Toubkal!!!
Difficult terrain limits communication with the stage and the news reaches us with delay. That is why today we present the texts that Leszek sent us on Thursday evening, unfortunately the internet in this area is very poor and the stage failed to send photos. We hope that soon we will be able to see views from past days of the route.

#stage31
A bit of geography: After crossing the Anti Atlas we got to the northern edge of the Sahara. The desert areas of southern Morocco are crossed by exceptionally flooded Oueds, herds of goats, camels, friendly gestures of passing Berbers and silence that is no longer in Europe. In addition, the night sky of the desert, which fascinated us so Kazimierz Nowak. We need this, we want it, we seek it, wandering around the world. It cannot be compared with anything.
We set off again from the Gates of Sahara into the Anti Atlas Mountains. Strenuous climbing, more oases, kazby, ouedy, palm groves, views at sunrise and sunset, liters of water bought in roadside shops and usually the dreams of cyclists: cold cola. Often available only at the temperature of a warm soup. Anyway, even frozen water after 30 minutes. begins to burn.
In the south we were the only Europeans in places completely free from tourists. Real, traditional towns with local life. Smoking barbecues, simmering tajin, matters and actions to which no strangers have access.
There was also a poisoned fruit in this Garden of Eden. At the hotel in El Mhaid there was an individual who stole my garmin. Kazik Nowak stole the contax, but he got it back after calling the police. All we had to do was ask the hotel staff to call the police, and in half an hour garmin was hanging on the handlebar of a bicycle with crossed tridents. It was the only unfriendly accident during his stay in Morocco. Berbers are extremely hospitable and willingly serve selflessly help, but as you can see, he doesn’t sleep badly and you have to be careful.
The last town before returning to the tourist routes is Taznakht. To get to it you have to overcome a specific driveway through the Tagargoust Pass at an altitude of almost 1500 meters above sea level. Dominika and Zbyszek at the head, followed by Monika, Piotr and Leszek, after treating Piotr’s cut finger, bravely climbed the heat-heated asphalt. Manuela and Mirko, aided by mechanical horses, reach the city before the rest of the crew. The heat discourages you from driving. We stay in a hotel where air conditioning is not needed for the first time. The windows overlook the High Atlas and the purpose of our trip. Only mountains from tomorrow. Above the maps we discuss the route for the next day. We are to reach Ouarzazate – the great city of “turistiko”. The route marked out by Piotr leads through a green valley full of oases and palm groves, and is topped by two brutal gravel driveways above 1500 meters above sea level. From there, gently down through the desert plateau. This is how Dominika, Monika, Zbyszek and Leszek saw this route. For Manuela, Mirko and Piotr IT was a path through torment. Steep climbs, dangerous descents, sun too close, water too far. Luckily, in one of the villages, good people gathered them under the roof, sheltering them from the sun, watered and fed them. Manuela invited by the hostess had a chance to try on traditional Berber clothes. Murdered all day in the sun before dusk, they reached Ouarzazate.