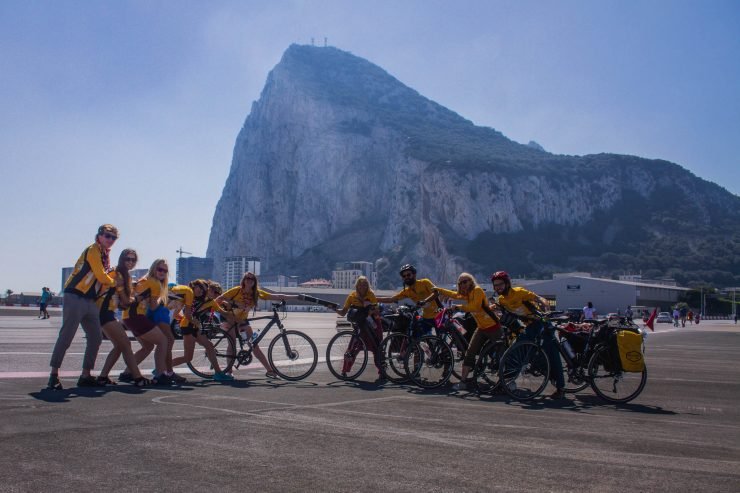 So, its time for Tetuan.

🇺🇸So, its time for Tetuan. I felt that we didn’t even see 1/10 of what the turquoise city had to offer … well, but we’ll be back someday! We needed to go further, especially since Adela had a malfunction with the computer power supply and Tetuan as a big city, could help us with this problem. And.. it helped! After arriving in the city at 14:00 (the road between Chefchaouen and Tetuan passed really quickly), we drove a little with the tongues hung out over the city hills and finally bought a cable … or even two! The price was so low that Adela decided to buy a second one in store 😂
We spent the rest of the day celebrating the purchase – we bought delicious Moroccan pancakes and sat on the terrace of our riad. After Chefchaouen, we thought that we would not find better views, but as the saying goes: never say never, we ended the day with a view of the Mediterranean Sea and mountains at the same time.

The next day we took over Instagram Kross! We were the first stage to broadcast stories directly on his profile, so of course … there was a lot of pressure. Fortunately, the route along the coast to Ceuta is picturesque enough, so in part it did a successful relationship for us for the sponsor. We wanted to make it to the earlier ferry, but the beauty of the places stopped us so effectively that we sailed one of the last!
However, before that happened, we experienced a slight shock entering Ceuta, a Spanish enclave in Africa. On the way to the border, we passed Moroccan men sitting along the street, who were hiding from the sun in hand-made tents. Each of them had an empty wheelchair next to each other, which made us curious.

After quickly crossing the border with light tears in the eyes (especially at Monika) we entered the ferry. During the cruise we once looked towards Africa, and once – towards the huge Gibraltar rock, which was the finish line of our stage. However, we got to it the next day because the ferries run on the Ceuta – Algaciras route. After arriving on a new continent, we drove part of the route. After turning roadside Mcdonald’s into a Bike Jamboree office, where we sent the last materials, we decided to spend the night in a nearby motel, with a bar downstairs. The Spaniards sitting in it greeted us with joyful shouts We also heard loud conversations of the guests until late at night … although maybe I should write in the early morning? 😉 The thing is that it was impossible not to notice that we came to a new, energetic world.

During our travel we meet amazing people with passions. The same was with me and Tomek,a friend of our relay. Entering a random bicycle store in Gibraltar in March, I met a fellow countryman and an avid cyclist who, a few months after my bicycle trip, showed a big heart by supporting Bike Jamboree.
The last day before handing over the baton we finally booked for bicycle service and visiting Gibraltar. Efficient and top-level service was of course possible thanks to Tomek and his Cycle Center Gibraltar. It should be added here that we only paid for parts! Tomek, you are great – we send gratitude towards you THANKS🇺🇸

We serviced our bikes in pairs, and Tomek gave us a replacement models, so we could cycling in whole group. When Krossy was looked after by Tomek and Miguel from the Cycle Center Gibraltar, we visited the southernmost point of Gibraltar, from which we got last look at Africa. We also spent a reflecting moment on the monument to General Sikorski. The last time we sat on the beach, where each of us fell into a melancholic mood – at the end of the next day we were to pass the baton and go in different directions.
After a break, we returned to Cycle Center Gibraltar and received shiny as new KROSS! Bravo Cycle Center Gibraltar On our horses we go to the campsite, to finally experience the pleasure of sleeping in our #Marabut tents.

After the morning nuances with the bike – our Tom flew out in the morning, so I made the route to Gibraltar twice to first help Tom with luggage, and then with my own things transport two bikes to the finish line .. Piece of cake! 😉 – we met with stage 33 just below the border. And we went together to the airport board, where we did a stick photo session. After the pictures, Marcin and Asia said goodbye and headed back home. One could say that it was the end of our joint adventure. But.. no! 😉 Stage 33. took our luggage, so with Adela and Monike we decided to hike on the highest point of Gibraltar (which was our dream since seeing the rock!). Ah .. it was worth it! From the summit we saw Africa – Morocco, which we have just traversed. To honor our joint adventure for the last time, at sunset we shouted our Waka waka waka, Africa Nowaka!

Many thanks to the sponsor of our stage of Apilia # apiliada