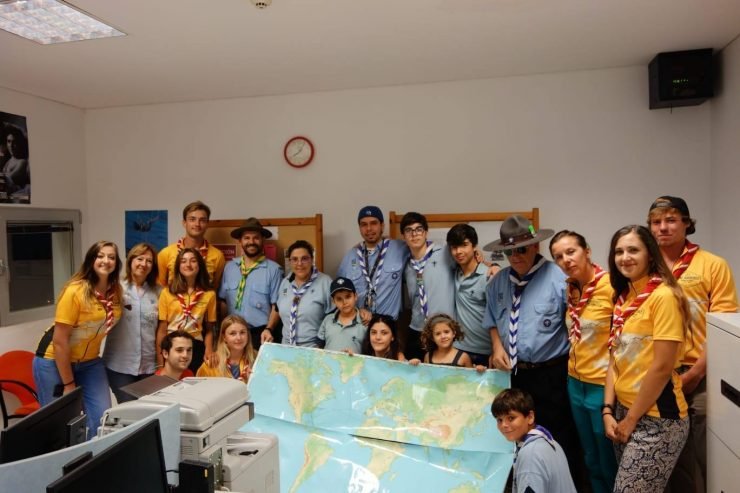 How would you sum up the next 3 days of travel here?

Maybe a very typical dialogue, which everyone who took part in the project heard, in one form or another on the way uphill with heavy luggage on bicycle?
Kevin (uplifting soul): “Uuu, I’ll have an great ass!” 😄
Ania (with a pained face): “It’s the only thought that keeps me alive”
Kevin (laughing at all): “But that mine or yours ??
Ania (exhaling): “Mine” 🥵😄
The next 3 days passed with more and more sophisticated styles of catching tripe and we had the first “spokes” 😏. The flat tires were on men side of our team. The best was made by Maciek, whose tire decided to turn into a sad pancake after 15 minutes we split between complete voids and hills literally for 20 km with a person who, as it turned out, had a pump. We were convinced that we had it as we were traveling as a last people in team. So we stayed with a tripe and a working tube in the middle of nowhere, and the pump ran too many kilometers from us to return 😑 on the road as for anger, nothing that would suit as hitchhiking for cyclist with luggage. For a dozen or so minutes, only the delivery trucks for transporting frozen food drove from larger cars – well, we would love to go there because of the heat, but the drivers would rather not be happy 😄. So what’s next, okay, there are road workers renovating the barrier – maybe they will help – they have a bigger car, that’s how it must go! After a few “sentences” in sign language we find out that the ride is not an option with movements indicating that someone will hang them or cut their heads 😢. But there is a light! They have a compressor! After a while, it turns out that the tip does not match .. Well, good sir .. Gray cells work at high speed! Gray tape! Let’s stick the contact point, maybe it will inflate enough to get to the nearest station☺️It is! We have it! It pumped up a bit – we reached a dozen or so kilometers to the station on half a tripe, where it was possible to give the tire the desired shape. The spokes, in turn, went in the female part of the team after crossing the stony gorge – it was worth sacrificing each spokes for views! Krossbikes and we like off road! ❤️The reward for the hardships on the road was reaching El Campello – a charming town near Alicante where equally charming scouts with accommodation awaited us ❤️❤️❤️ there was a meeting with the city council and welcome, gifts from the city (Spanish rally like giving gifts💕) and joint meeting in small restaurant opposite the scout club where we were to spend the night and our next day off ☺️ It was great! A big thank you to Arturo (Wolf), Coco, Kajetano, Javier and Vicor, who not only showed us El Campello and Alicante (where we discovered the hilarious Mushroom Street,), spent time with us devoting all day to our presence but even in the evening they took us to our first dance party in Spain 😍! There was a pool, sea, lights and hot Spanish rhythms 💕. The next day brought accommodation in a scout unit in Denia and the company of a great man Kiko – a scout who decided to join our relay race for 2 days on his bike 😍 The team is growing! Kiko also took us on an exciting trip to a beautiful cave near Denia – Cova Tallada – from the rocks of which probably a castle standing in the city was built ☺️.
It is beautiful, the sun is shining, the road is pleasant, nothing but go and enjoy the road ❤️.
Music to reflect our time, enjoy, while stomping foot! https://youtu.be/zNl00mOSnJI
PS: We were supposed to write about food in Spain but we will leave this “tasty morsel” for later as we still discovering new meals 😉!
Stay tuned!
¡Adios!