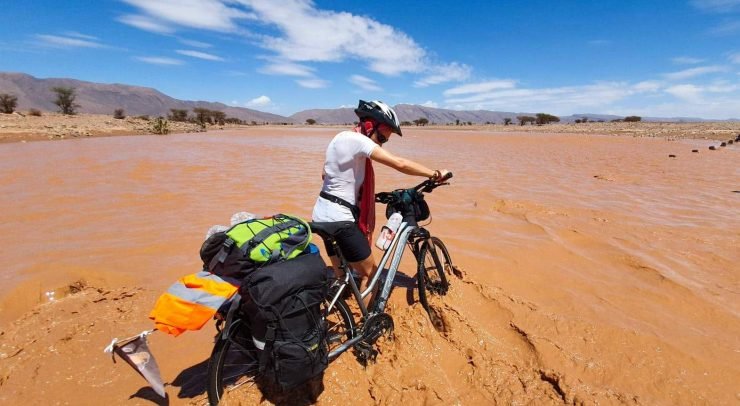 We have already written about exceptional downpours and floods in Morocco. For us, heavy rain is only a lack of water in the hotel and the morning decision to change the route for a longer one, which was caused by fear of the passage of local roads. As it turned out later, already on the 126-kilometer route, the fear was correct, because we overcame the fallen river thresholds twice, carrying bicycles. Anyway, this stage of the trip has so far provided the most excitement. We descended on it (about 1700 m down) through unusually scenic and landscape mountain formations with a 3-hour stop in the humming cold water, extensively overgrown with palm trees an oasis located on the edge of an abandoned city called “ghost town” by Mirka. And in this oasis, the owner of a local store suddenly became a guide to the paradise palm gardens and the manager of a pool created on the route surrounding the entire oasis of the aqueduct built in the concrete aqueduct. He walked with us proud of this place, he offered us dates, grenades and figs straight from the tree. That’s how we got to Tata. Dad will remind me of the night cleanliness of the town and the arcaded buildings of the streets, and finally, AT THE END! with cold drinks, which Zbyszek bought us at the hotel.

The next day we left very early in the morning, inflated 14 bicycle wheels at the gas station (thank God for the relay adapter from the car valve to the Presta valve) and headed up again. The weather was good for us. It was rather cloudy, and at the end of the 70-kilometer section even slightly rainy, although still very warm. Mirko, weak again from the stroke, together with Manuela used a 20 km hitchhiking. And the rest of the crew on the route met riding against the tide, an old “new” bicycle without derailleurs of a widely smiling Rastafarian. He could be heard from afar by the crash of some wheezing radio that he carried in a sackcloth bag and the sounds of the vuvuzel in which he was blowing on passing vehicles. I wonder if Nowak smelled like that?

We get to Tissint quite efficiently, where we log in to a beautiful shrine with a swimming pool already at 13.00. Unfortunately, I didn’t use anything there because it completely smashed me up. The rest of the team did not feel great either. Everything hurt: muscles, head, stomach and throat.
Hassan, the nicest Moroccan I have met so far, has helped us in the Kasbah Hotel Tissnt. He took care of medications, ice packs, was polite, even enlightened, he spoke in tongues, cooked jelly from Manu, arranged transport for the sick four for the finish of the next stage and still played my favorite tuaric music of the band Tinariven.

Yes, another day is another challenge. Already at night there was no water, because we were caught up here by the rivers of dried rivers, the day before yesterday downpour fed with yesterday’s light rain. The script was the same. No water in the hotel. At night, the door from our rooms did not close. We flew with toilet flush buckets. No passage through the beards or, if you prefer, Moroccan bridges, which are built at the bottom of wide and high riverbeds washed by water for years. The effect of this is that every small rainfall cuts off one side of the river from the other, because the current is really swollen and bright. And then you wait. Calmly. African. We did not want to. The meeting lasted until 10.00. The hosts obviously advised us not to cross, and the temperature was rising. Finally, another 70 km with two adventure crossings over the river went Monika, Leszek and Zbyszek. The rest of the crew bought a large and juicy watermelon in the town and waited for Toyota 4×4, which took them to Foum Zguid.