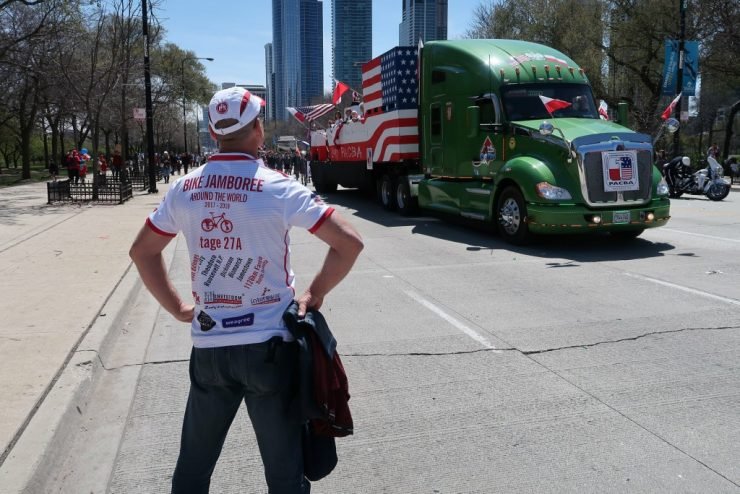 #stage27a transmits for the last time.

. #Stage27b has finished their journey so we will join with the final thoughts about our relay stage. In the end, it used to be one stage – 27. Why we decided to write now? Because we are already at home. Peace, silence, relaxation. You can focus in your mind and not just on the noise of the wind in your ears.

From the very beginning it was known that stage 27A will not have easy driving. In two weeks we had to drive over 1,200 km on the asphalt and gravel roads of Montana and North Dakota. These are not cyclist-friendly states. Above all because of the huge distances between the towns. This situation required us to pack more liquids and food on the road, which affected into the total weight of the bicycle. Also the weather turend out to be very tricky this year. During these two weeks, we traveled through four seasons. It started from the summer heat passing on cold nights, then it was autumn weather and then passed a snow storm with a sensible temperature up to -8. And let us remind you that we were traveling between 12-24th May. And to all thie add the wind, constantly blowing in the face. Annoying, tiring, demotivating. For six days, day after day it beat us in the face. Once on the left and once on the right, with an average speed of about 30km/h and gusts up to 50km/h. The wind is turning, leaning against the wall, fully loaded bikes. Wind stopping us on steep descents, forcing pedaling downhill, so that the bike does not stop. I will not lie. In such conditions, we had moments of weakness, moments of collapse, but together with our strength and support we arrived on time to Fargo.

A great role in the success of our stage was played by good souls encountered on the way – people who supported us mentally, physically and materially.

Becki and Lamar Wagnon from the town of Plevna, Montana – we met them in the local bar, which was an oasis for us after a day’s driving in the scorching sun, without a roadside shade, and for them the only place in the town where you can have dinner. When we talked with locals about places where tents can be rented, Becki and Lamar offered us a night in their motorhome, parked in front of their home. It was the first such offer from strangers, so we hesitated, but we took advantage of their offer. We spent the evening on the stories, Lamar showed us the model of the USS Enterprise aircraft carrier on which he served, and in the morning, she prepared us a delicious breakfast and coffee. And that was just the beginning of people with a good heart.

Jodi and Myron Schweitzer from the town of Medora, North Dakota – the day after reaching Theodore Roosevelt National Park the weather said it was time to show the horns. The morning greeted us with low temperature and rain, which after a few hours changed into hail. Then there were voices about snow the next day. We left everything on the campsite and went down to the small town of Medora to pick up a food packet and drink a good cup of coffee. The farmhouse run by Jodi and Myron turned out to be the only café in the town. Sitting in a cafe, sipping coffee and debating what to do next in such weather conditions, Jodi approached us and offered to stay in a cafe. Total shock! In such a situation it is difficult to refuse. Myron also lent us his pick-up to transport our wet tents and the rest of the lapels to the coffee shop. Thanks to them, we spent the night in the warmth, with access to a shower, and in the morning we were treated to a great coffee with different flavors and types. That night was very comforting. The more so because the window was already snowing outside.

Before leaving, a regular client Jodi came to the cafe, who listened to the story of Bike Jamboree and further plans of our group with interest. She was moved knowing what awaits us that day. She really wanted to help, so she gave us $ 50 for a hot meal along the way. At that moment everyone was moved. It was a pity to leave this place, but we had to.

We have collected even more of such donations. This time from Poles who passed us on the highway saw the Polish flag on one of the bicycles and stopped to check – what is it? who is this?

Jeff, Josh Dunn and Heather and the others who helped in the transport of some members of the stage.

I would like to thank all of the above-mentioned people from the whole heart and know that we have a great debt of gratitude towards you.

Thanks are also to:

KROSS bicycles – so many thousands of kilometers traveled, and your Trans 9.9 bikes carry the relay team and their bundles packed in capacious and durable Crosso panniers,

CST Poland – as they say in the US: if the tire can withstand the ride on American gravel, it means that it is worth the interest. Your tires traveled on asphalt, gravel and broken brick, and no one gave up

Primus Equipment – tourist necessity for every participant and tourist burner

LESOVIK – for the tarp, which served as a shower screen and a cover from the sun when there was no natural shadow around

Finally, as a leader, I wanted to congratulate the other members of the stage of finishing the route. They showed the strength, determination and will to fight. Neither of them ever said that he did not want to go any further, that he was tired of wanting to come back home. And in the conditions in which we went, this statement could go down at any moment. Congratulations again and thank you for a nice two weeks.

A detailed description of the events from stage 27A will appear soon on the website of Polish Bikepacker – I hope you will follow me there!

Thank you for your attention, greetings to all and we wish you the next steps of a wide route and safe access to the goal.

Over and out – Jarek Ciosek, leader of stage 27A.