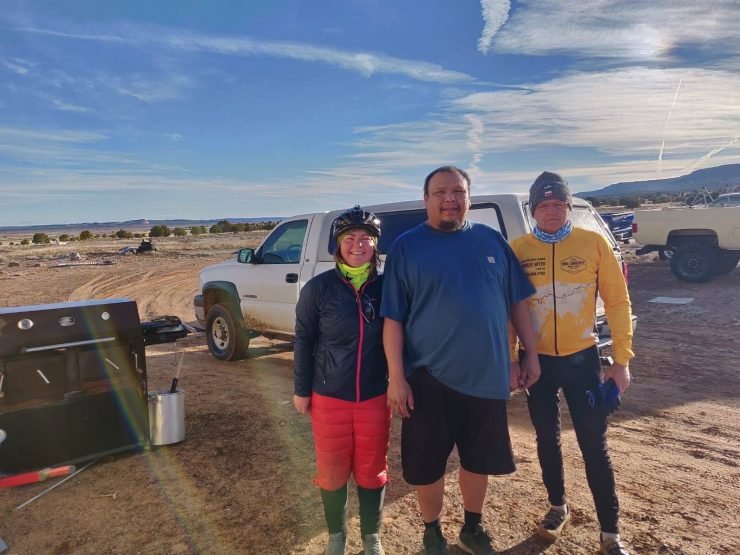 No one can better understand a cyclist like a second cyclist.

No one can better understand a cyclist like a second cyclist. 🚴‍♂❤ 🚴‍♀

Jonathan – proud and happy Navajo, passing us along the way with his car, wondered: “Where will they sleep?”. That’s why he came to us at a petrol station, where we had already “managed” a night under a fence in tents. He took us under his roof, introduced himself to his family – his son Wyat, who played with LEGO blocks, his mother – an artist who made beautiful things from clay, a stepfather who was once a guide and organizer of Monument Valley tours, as well as Ivy – a petite bitch who liked Andrew’s knees the most. We have been given a typical Nawah meal – fry bread – a kind of fried cake with different toppings.

Jonathan himself rode a lot on a bike as a teenager – including he toured the entire Nawah reserve (about 500 miles), which is why he knows that a warm shower is the biggest reward for a cyclist after a day’s ride.

Jonathan told us a lot about the culture of the Navas, about influences on it, about language and the surrounding area.

The evening was complemented by a movie on DVD “Windtalkers” about how the Navajo language was used as a cipher in the Second World War.

If that was not enough, we were given the paintings of his uncle. 🖼

Traveling is not just beautiful places that you visit. It’s primarily the people you meet and who open the door to your world. 👩❤👨
And it is a really nice feeling that no matter where in the world we live, certain values ​​are universal.
So let’s be good to ourselves 😊