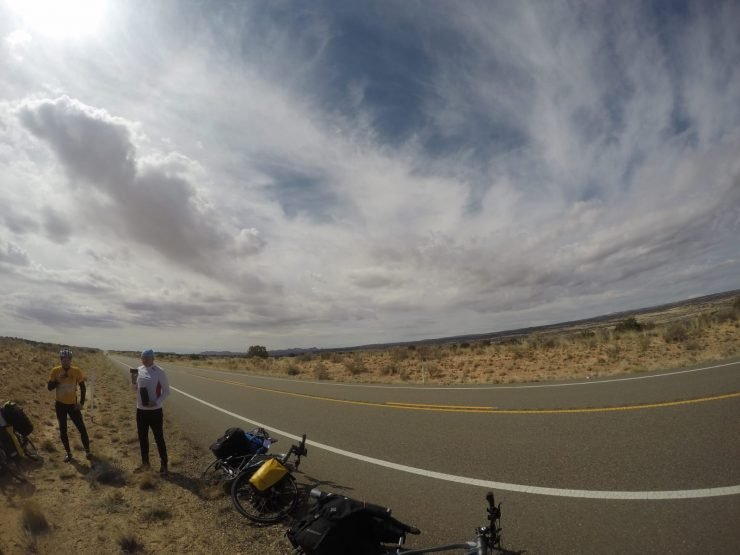 There are already 240 km on our counters

We are in Page. There are already 240 km on our counters. The route led to a large extent, gently uphill, with a few hills, where a little bit thighs burned. The guys are real harpaganys – against the wind they glide like on the table. I do not know what they ate when they were children, but I doubt it would be something commonly available in the store. 😉
The last 20 km is a ride downhill. When I was driving around 40 km / h and my thoughts drifted towards the unresolved dilemma, whether I would shower first or eat something good, suddenly I was snatched and jerked out of these considerations. It turned out that the top hook rose from the pannier, and it fell with a bang to the ground … breaking one of the spoke. Guys long ago at the end of the hill, no phone signal… When I tried to get into this, a gentleman came to me by car, asked if everything was ok, because he was scared that I had an accident (I didn’t, my pannier and spoke – yes). Because he could not help me much, I asked him to tell the boys what had happened. And so I sent the first analogue SMS in my life 😎 Marek immediately came to the rescue, Andrzej followed him, took my heaviest baggage, wrapped the spoke so that it would not bother me and we slowly descended to Page.
At the nearest gas station, I asked for a bicycle service. The answer was a hand-drawn map, thanks to which, after a thread, I got to nice men, who promised to repair both a spoke and a bag. Restored by this fact, I could go with my heroes in the evening on Horseschoe Bend.
Believe me, the pictures may look impressive, but none, even the most beautiful shot of the best photographer, will give back what you see live 😍