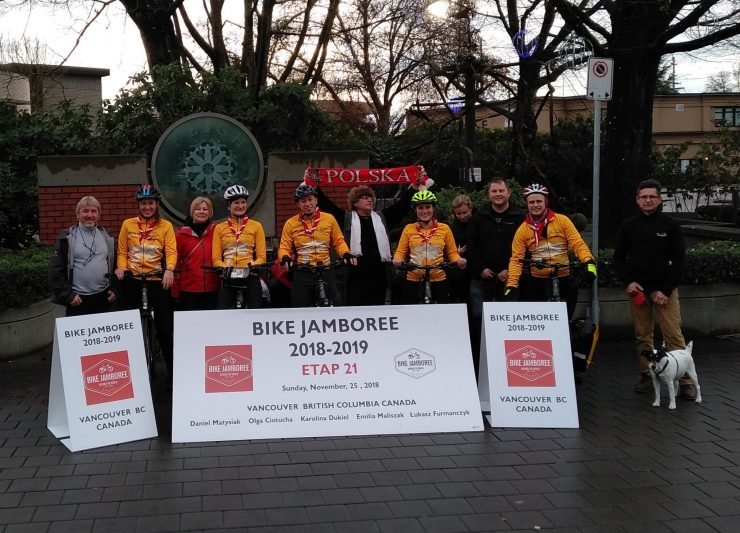 We are an “eyelet team”

Hi, hello and be prepared!
We are a “eyelet team” and for the next month we will be traveling from Vancouver to San Francisco. 🚴♂🚴♀🚴♀🚴♀🚴♂
We are grateful to #stage20 for warming up to the battle, the secret promise of a beautiful woman and thousands of golden advice from which we remembered only two:
1. It is impossible eat on stock
2. You do not smell in the cold. 🤢
Officially, we accept your challenge of a broken inner tube!

Polish community mobilized by Mr. Rafał from Radio Iks – listen our talk on the show! ➡https://soundcloud.com/rad…/radio-iks-24112018-bike-jamboree 📣📣📣 – appeared at the starting point and touched us with professional banners and sounds of tambourine. 🙋♀🙋♂ In such a festive atmosphere we began our journey. Crossing the border with the US, we told the publican about the project, which he only summed up with the question:
“Whose bright idea was that?!”. 👮♂ Slats not touched, canned food has passed, ride!
P.S.
To the list of sponsors of stage 21, we add Kasia and Grzegorz and the crowd of people who have dropped! THANKS! If you want to drive with us, this crowdfounding still continues:
https://zrzutka.pl/d8aveb 💸💵💰

The first kilometers, the first broken tubes, the first llama encountered. 🤗 We thank our host Derrick Bovenkamp from Whatcom District. The next day, the wind at times changed our bicycle relay in a walking pilgrimage. 5 km / h and wind straight in the back, if only they would be on the forehead. 🤣 Due to the storm, the ferry was canceled and instead of sleeping under the roof and seafood with scouts, a tent in the tent behind the church and a peanut butter from the jelly took place … but your home, where your mate is