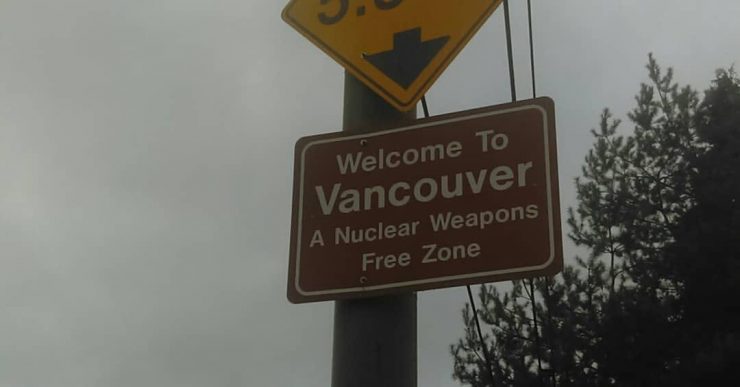 If we were to choose the best host during this stage, it would be much harder than ride from Prince George to Vancouver through Jasper and Banff. Tom’s host on the farm was pure pleasure. 👍 After a delicious dinner, we sat until the night, sharing various stories. The next day, we got a solid breakfast, including beef from Tom’s farm. Later, the host himself got on his bike to show us the best donut place in the city and a longer but much nicer trail to Vancouver.

Even the rain didn/t ruin this day. The first several kilometers are mainly flood banks over the river in the autumn scenery. 🍁 It is also another tube caught on gravel. 🙄 The second part of the ride is already the entrance to the quite large Abbotsford and drive in the rain to Mission. ☔ Each of us fell into a lethargy motivated by a warm night somewhere 30 kilometers away. Falling rain, darkness and highway traffic, often without a sidewalk, it was one of the most difficult moments of this trip.

But it was worth it. The host of the Warmshowers welcomed us with great enthusiasm, opening a garage with over 15 different types of bikes. 🚲🚲🚲🚲 She then gave us the towels and showed everyone the bathroom where we could bathe. Yes, there were 4 bathrooms in the house 😀 🛀🛀🛀🛀. We spent the evening in a place full of energy. There were over 12 people in the house, 👨👩👧👦👨👩👧👦👨👩👧👦 of which five kids played on consoles all the time, even without greeting us. The rest of the household members, however, drew us into family stories. Funy story – Maciek and Wojtek spent the night in a motorhome. 🚐

The last straight, last day. 😥 What can go wrong? We start the day with falling rain and replacing the inner tube, that went flat overnight. This was the number 27 tube during whole month. We joke that today is the last one, that our race in number of gums is already settled. Ha… ha…. 🤐

We enter the highway number 7, a quieter alternative to the legendary no 1, but that does not matter anymore. We are in such a density of cars that the traffic is everywhere, the roadside is untidy. Somewhere before Burnaby, we catch two inner tubes at once – a nail and glass. A dozen or so kilometers away, just before the “Welcome to Vancouver” sign, Maciek heard his tube burst – 3-centimeter glass from the reflector, caught at the intersection. The last tube of the day – eighth – we exchange a kilometer from our finish line – the statue of Inkushuk located on the ocean. Before the rain, we hide under one of the bridges. 🌧🏁🔧

Vancouver is overwleming. Just few days ago we pick up heads to admire the great trees and power of the mountain peaks. Now we admire the power of a man who has raised dozens of skyscrapers of glass and steel. 🏙🏙🏙 Despite the nasty weather, the unexpected number of people are walking or jogging. You can get used to everything. Between these thickets of large skyscrapers, you can still see small single-story houses, known to us from the towns passed on the route. 🏠

We arrive in the pouring rain for a statue, congratulations. 💪 There is no big explosion of joy, fete. It is rather a relief and of course a photo session. This is the end.

A month has passed fast, huh?

Statistics institute for the participants of the XX stage:

Already out of the competition – even today in the morning Wojtek caught a tube during the trip to the store, only a few kilometers! 😀

The remaining stages – as they say – game on!