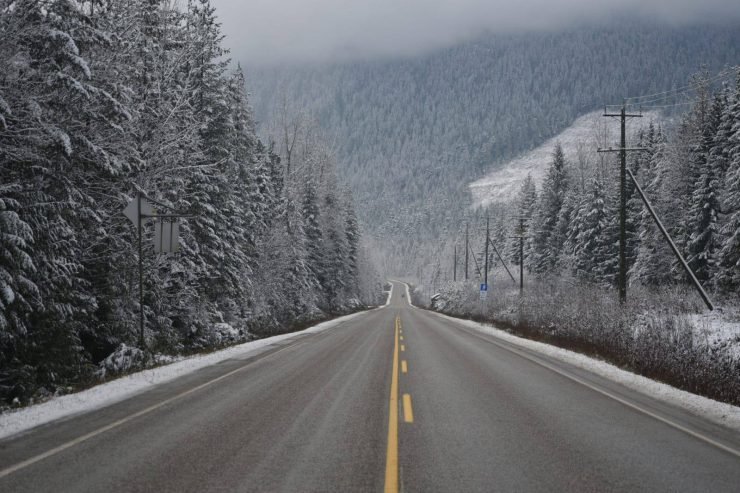 Totally relaxed, we stoped by for a coffee ☕ and again a little bit later than we usually got on our #Kross bikes. 🚴‍♂🚴‍♀🚴‍♂T the magical night however didn’t chaned the road. Small traffic, a lot of driveways and spruce around. Here and there, a huge lake shimmered, reflecting colors and giving the surrounding landscape even greater charm. An enormous space is another of Canada’s characteristic features. 🏞

After 35 kilometers, we reached the town of Nakusp, British Columbia. This was by far the most important point of our day. Entering such a place definitely improves the mood. You can, for example, drink coffee. Or buy sweets. This time, a cake was bought, because… we celebrated not only Polish regained independence, but also a birthday of our leader Monika! A small conspiracy, a card, a cake, candles and just under the post office in Nakusp, joyous “Happy Birthday!” was sung

🙂. Monika herself stated that it was the best birthday cake she had ever eaten in her life! 🎂👸🎆

We sat up happily along the lake’s edge into the further part of the road, during which Maciek broke another innnertube…🤣 This part ended after dark at Arrow Valley Lake in Burton. Here, the sky greeted us with bright stars, wishing Monica all the best. It definitely was the prettiest our accommodation so far. ⛺

Another quiz on our route! Although we left the mountains some time ago, we were waiting to enter the pass with the beautiful name Monashee Pass.

In the morning we crossed the ferry to the other side of the lake and we started the fight. For starters – several hundred meters with a slope of 12%. Then a long and very exciting downhill ride that was supposed to be the last free kilometers of the day.

The driveway at Monashee Pass was like the damned promise of a beautiful woman, who makes us to drive up and down. Monashee. Well – who in their right mind would climb with all this equipment for over 40 kilometers by over 1200m?

The driveway took us some good hours and the day was planned to end at a small campground at the top of the pass. It didn’t, because at the top of the hill we were once again reached with regular winter with a solid frost. The decision was unanimous – get out of here. ☃

In the Egyptian darkness, like sailors led by stars and the moon, we rode down on our KROSS, through ravines, only rarely overtaken by passenger cars. Pure joy and a beautiful new experience.

A day focused on pleasure. 😍 After the wonderful drive down from Monashee Pass, the surroundings have changed – now we were entering the Okanagan valley. The landscape was filled with ranches, fruit orchards appeared, definitely more population. 👨🌾👩🌾

Our host, Leonard, met us on the road. Together, we have overcome more than 15 km and we sat down for a pleasant lunch on his farm. 🥣

Leonard works mainly with cows on his farm. He gets up to work every day before 3 am. Although for him our arrival was half the day, we quickly caught a common language. He directed us to the newly built trail we were supposed to go the next day.

Leonard’s wife, Bernadette, prepared a real surprise for supper – none of us expected that in Canada we’ll eat … polish dumplings! With cottage chease and onion and sauerkraut, specially served with bacon, mushrooms and cheddar, which is undoubtedly a national matter of Canada.

At the end of the day, we watched the housekeeper’s artistic work, talk about Poland and politely extinguished the lights. 🛌

We have reached the moment of our journey, when we had to sit down and set a further route to Vancouver. On this day we had a lot of accommodation options – the grapevine works! – but nevertheless we decided to go to the largest city of British Columbia, not to mention Vancouver and its agglomeration. 🏙

The beginning of the day was a challenge – it snowed with rain. 🌧 Certainly, the aura caused Leonard’s friends’ didn’t appeared at Kalamaka Lake to drive to Kelowna together.

The trail we entered was an amazing respite after days when a gust of passing trucks pushed us off the side of the road. A very picturesque road among nature interspersed with very rich settlements with private jetties for boat mooring. 🏡 🚤 And for over 20 km, until the weather changed from late autumn to early spring. It is in such circumstances of nature that Wojtek catches the seventh tube and goes out to lead in our infamous ranking! 😅

After three weeks of traveling through deserted areas, entering a quite large city can be felt with double strength. Noise, constant motion, lights, people – that’s something we already forgot and getting used to it will be for sure difficult. 🏗🏘🏙😨

In Kelowna, we see several skyscrapers, which is also unique in Canada. We do shopping and wait in the cafe for news from our host who, despite the initial invitation, has stopped replying to our news. Fortunately, we manage to find another accommodation almost immediately. 👍

The most lazy day in the world – it is today 😏. Long lying in sleeping bags, and then sweet unhurriedness. Our host, Ashley, left us the keys and went to work. Maciek went for a walk to get to know the city a bit, and Wojtek and the girls prepared dinner. We spent the evening on very pleasant conversations, showing pictures of our trip and our host, avid cyclist and traveler.