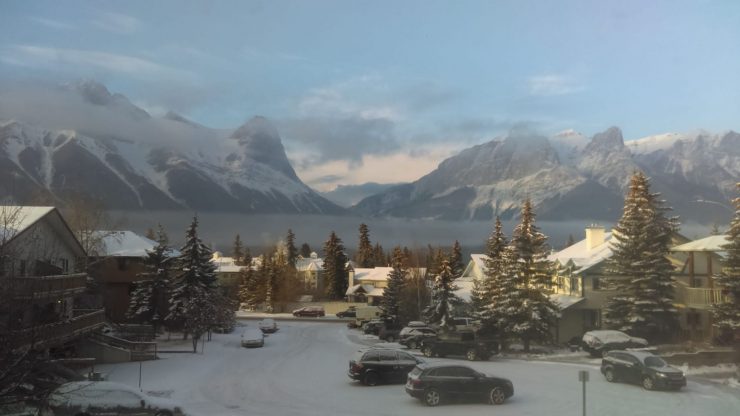 The frosty morning greeted us again. However, the bikes suffered the most because some of the parts were frozen. So besides typical morning activities, we had to remove some ice from our bikes. Later it was only beautiful. 🙂
We entered the landscape road of Bow Valley, parallel to the Trans-Canadian Highway No. 1, with the difference that no more than 30 cars passed us through the entire day of cycling.

A road as picturesque as the Icefields Parkway. All the time we were accompanied by the river and large snow-capped peaks on both sides of the route. The impression was that these mountains practically do not end, only take more and more different forms of peaks, all dignified and dangerous, especially covered by white snow caps. They were equally tempted to go climbing. 🏔

I must admit that we were also very cold. The stage was not very mountainous, often run in dense forest, where it was definitely below -8 degrees. Along the way, we saw a lot of traces of animals – wolves and bear, and the snow – as we later learned – was two or three days ago.
Soon afterwards, he came to meet us … a lonely gray wolf. 🐺 He crossed the road, stood in the middle of it and looked at us. It is only at such times that the human being is reached, that all these warning boards, stickers, leaflets about wild animals are not Disney’s stories, but simply Canadian everyday life.

We arrived to Banff, frozen and full of hope that someone from our potential hosts would write to us and put us in the room. And then a miracle happened that happens very often on the road. Of course, nobody wrote back at Couchsurfingu or Warmshowers, but one of the ladies working at the tourist information at the railway station – the first place in the towns where we go to warm up and check the Internet – invited us to each other for the night! 👩 <3
An hour later we were happily traveling by bus to Canmore – a town as large as Banff, but less tourist, located 20 km away.

We came across a very nice multi-family housing estate and a moment later we were in the warm interior of one of them, warmly welcomed by Bruce and Olli’s dog. 🏡 The host is somewhat surprised but hospitable, like all the people we’ve come to in Canada so far, whether sleeping with them or just talking on the road.

The evening was spent in a very nice, fun atmosphere. Until now, we have stayed in people who are age-matched to our parents or are older. We were fed, interviewed about our path and project. We left Poland for the next evening…

New day! First of all, the first time we left the bikes in the shed for the whole day and there was such a thought that walking also gives a lot of pleasure! 😀

Longer sleep, morning coffee with a simply wonderful view of the Banff National Park – definitely a better panorama than on the postcards in stores – and we decided to separate.

Wojtek, by far the biggest bicycle igniter from our group, rolled up his sleeves, took the grease and devoted his day to the review and small repairs of our equipment. 👨🔧

Monika and Jagoda, armed with a shopping list, set off to conquer Canadian markets so that we would not only have something to eat on the way, but also to have dinner with our hosts.

And me – Maciek – using the perfect weather – something like when you go skiing for a week in the Alps and you get back tanned – he went to Banff to see the postcard Banff Springs Hotel – built in the 19th century by railways that led to Banff line by the way, discovering hot springs and great tourist potential of the place – “If we can not export this beauty, we will start to import people here”.

Banff is a resort town, located in the valley and surrounded by small peaks and reaching over 3300m. According to statistics, over 4 million people come here every year (phew, it’s good that we are in November). This is a paradise for people practicing various sports: skiing of all kinds, climbing, cycling, kayaking. But also ideal for quiet and easy walks or thermal baths in the hot springs of Sulfur Mountain.

As in all the non-metropolises of Canada, which we have seen so far, low-rise buildings predominate here. You can not look for historical buildings or architectural attractions (what we are used to in Europe at every turn). A lot of hotels, souvenir shops and outdoor brands. Of course, there are also typical places, such as the office, post office, church etc.

Ban River flows through Banff and a very picturesque trail is marked out. Despite the nice weather (in the sun), but a lot of frost (in the shade) I saw anglers stripe in the icy water. 🎣

The road to Banff Springs Hotel runs either by the river or normally along a road among houses and houses. Suddenly from this sleepy idyll grows a huge colossus – a castle, reminiscent of mountains surrounding it, with towering towers, sloping roof. Associations with Stanley Kubrick’s “Shine” are advisable, although the hotel is in the USA.

The movement prevails like an anthill. The cars come and go, and I – although I would never stay here – I step inside. And there are huge stone rooms, of course lined with carpets, carpets and wooden furnishings. It is warm and light. I go to the restaurant on the second floor, I order coffee and something to chew on and enjoy the view of the terrace and sun-lit peaks in the distance. Sometimes it’s enough to enjoy such views from the warm interior. And that was the moment. 🙂

And at home we had full hands! Today we are preparing dinner. And here I am grateful to girls and Wojtek that they took care of everything during my discovery of Banff.

We served potato pancakes and apple pie for supper. Smell, as if I was entering my home in Wałbrzych, not 9,000 kilometers west. The evening is spent on food and conversations, serious and very funny. Happy days!