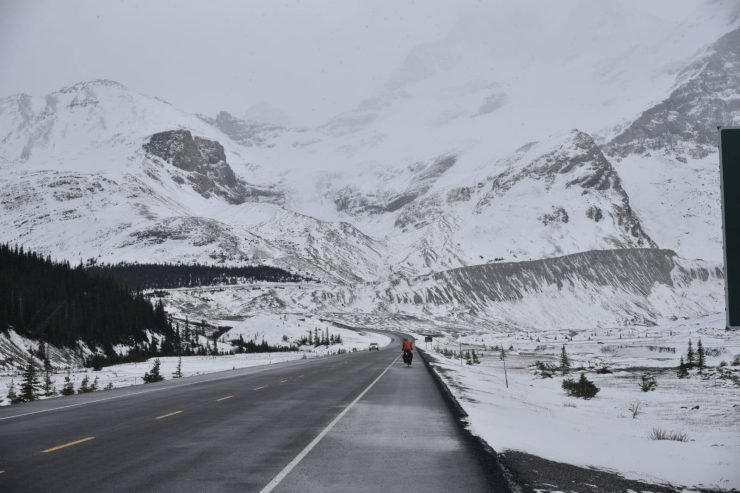 It was a really busy day! We jumped out of the sleeping bags by 6:30, to be on the road less than two hours later. And oh, what a road! Icefields Parkway is one of the most picturesque roads in the world. 🏔Preached by numerous streams, leads in parallel with the Athabaska and Sumwapta rivers, and on both sides are separated by high peaks with eternal snow. Mountains are a permanent element of the landscape, every three dozen kilometers there is another three thousand peak, which in the lower regions are covered with green and rusty conifers. I was never good in nature, so unfortunately I do not recognize what trees are. 🌲

It was cloudy, but fortunately it was not raining. 🌥 Records dropped. In total, we have completed over 600 meters of driveways, we finish the stage at an altitude of 1600 m above sea level. With 72 kilometers and over an hour spent on admirable waterfalls, it’s really an extra result! 💪

At the campsite – cooking dinner, chopping wood and we’re ready for the first night below 0 degrees C. ⛺

A, tubes! We add one broken in Hagoda’s bike and get 12 in total. But don’t worry. At this point in the cycle-bags we have 6 repeared and 4 new inner tubes. Is this a record? 😉

We did it! Stage 20 will not go any higher! But from the beginning …

The day began with our ritual. Some people drink coffee, whether they stretch after leaving the bed – we like to catch the morning gum 😅. Jagoda has already three. Wojtek’s little mistake when setting up and …another one. His fourth. 👨🔧

The first 20 km of the day passed quickly. Good, lively pace, and the snow heavily in the face. Low-hanging clouds did not announce anything good. 🌨

We started climbing from a timid reduction of gears, but it was so steep, that the most effective was to push the bikes uphill – over a distance of 2.5 km we rose about 300 meters. 🚵‍♀🚵‍♂🚵‍♀🚵‍♂

On the other side of the pass we saw a different world than before. Frosty, snowy, raw. Big, towering peaks, omnipresent whiteness cut only by black asphalt and blue of flowing stream and glaciers. We drove into the Columbia Glacier area. ❄❄❄❄

Shortly thereafter, we were celebrating the entry to the highest point of our stage. Already higher than 2074m above sea level, we will not have to enter 👏👑, and then there was a descent. A few hours of slow drive up to 12 kilometers of the exit in less than a quarter of an hour! ⚡

To bind the day with a buckle, Maciek leaves the rest for a small reconnaissance of campsites and to beat another record – he catches the fifth tube…

We spent the night at the intersection of 93 and 11 highways. Another ghost place closed for the winter. 👻

Some say strenth for such trips is made in the first days of the expedition. Well – we agree. 💪

It was a hard and very cold morning. The temperature dropped more than nine lines below zero, some snow. Careful first kilometers to the next hill – about 30 km of continuous driveway on the Bow Pass – 2069 m above sea level.

The weather is definitely undecided. The falling snow gave way to the sun, to fall again in the face. 🌨 The trip is achieved in a good style in slush mud.

Such climbing must, of course, be rewarded, and I do not mean breaks at the very picturesque Bow Lake and sandwiches with peanut butter, nutella and jam. 🥪 I mean the way down – all 40 km to transcanadian Highway no 1 and Lake Louise! 🚗💨

Evening with no suprises – some shoping, camping, cooking, chopping wood and chatting. 🤗

It was a really busy three days in the divine scenery of the Rocky Mountains. Applause for us for style, applause for our sponsors for reliable equipment!!! #KROSS 👌 #Crosso 👌 #CSTPoland 👌 #PAJAK 👌 #LESOVIK 👌 #PrimusEquipment 👌 #MotorolaSolutions 👌

Some statistics for the end:
Kilometers traveled: 609
Sum of driveways: 5090 m
The highest point: 2074 m above sea level
Broken inner tubes: 15
Showers: 2
Oatmeal for breakfast: 9
Sleeping in a tent: 9
The lowest temperature at night: -10
Animals: several squirrels and deer, one caribou
Jars of peanut butter (1kg) – 3