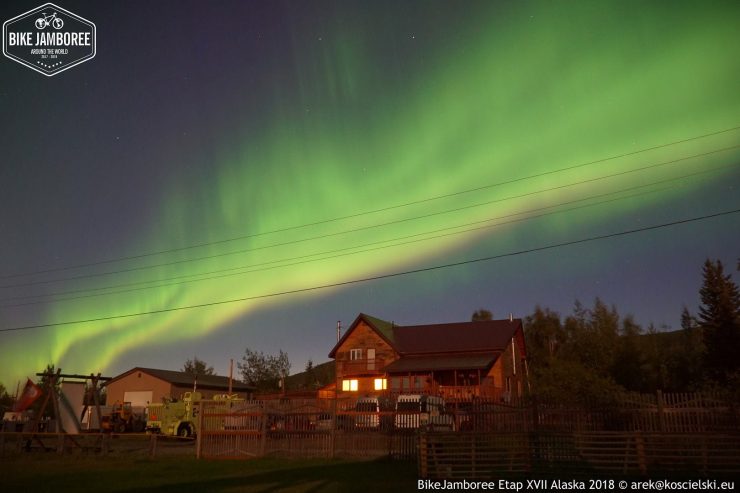 Do you remember the “Alaska Stop”?

The sun gave us wings and in one day we covered 115 km. Beautiful views and wind in the back (with the thread of the end of the route when it was blowing straight into the face). Where we stop, people come up to us and ask where we are from, where we are going. This is a great opportunity to talk about Bike Jamboree. We also met a US cyclist, who has been on the road since May 30th and is travelling alone in the United States. Its plan is 10 thousand kilometers!
We reached Nenana. Do you remember the “Alaska Stop”? Nenana, so write down Cicely! We left here at a beautiful sunset. Empty, wide streets, old houses, three churches and one bar… And a huge 210 m, beautiful bridge of 1923. The town was formerly called Tortella, which originated in the Indian language of Atabaski Toghotthele (TOG-uh-TEE-lee), which means “a mountain lying next to the river”. 350 inhabitants, 40% Alaska’s indigenous population.
And at night there came a reward, probably for those rainy days: we saw a beautiful, magnificent, huge Aurora. For the whole sky!
And during this time our daughter Halszka and her band On the fifth threshold from Czarnkow won awards at the Danielka Festival! We would like to congratulate the whole team, especially the manager and author Mr. Zbyszek Rolniczak!