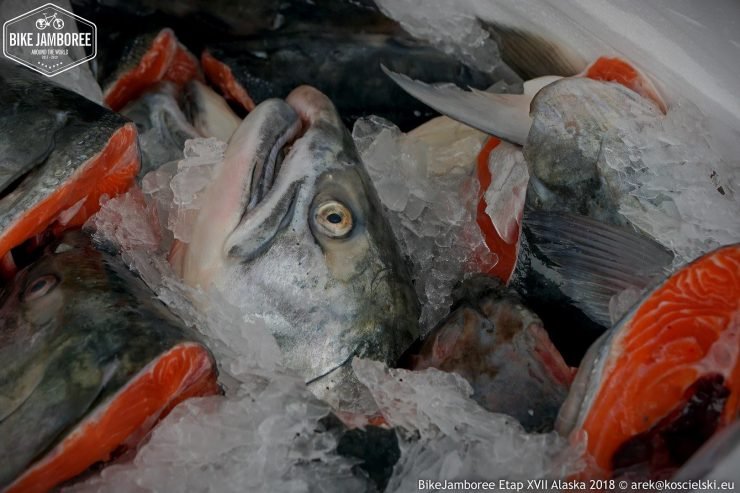 Our way is writing its own script

On Saturday we went to the local market. Colorful and cheerful place. A group of different stringed instruments wins over the buyers. The girl in the middle calls for a lottery. The children are dancing, the dogs are running. The centre of a big city.
We are from the land of pyre, Wielkopolska, but we have not seen such a variety of potatoes on the market or in shops anywhere. From colour to choice!
Again it turns out that our way is writing its own script. Our yellow relay shirts attract the attention of Alaska’s inhabitants, which often ends in a conversation about us, about Bike Jamboree and, of necessity, about our adventures with luggage. As a result, we had the opportunity to meet the United States Senator-in-Office from Alaska, Mrs. Lisa Murkowski. We talked about our Bike Jamboree, what we do, our problems. Lisa Murkowski, as the second senator in the history of the USA (50 years after the first case), was elected without the support of her party as a candidate added to the list, i.e. not on the official list of candidates, but entered in the vacant place on the ballot paper by the voters. It won!
During the search for bicycle panniers we met black American Arenza Thigpen Jr., who collected signatures for candidates for local elections in October, i.e. as in our country. He surprised us when he said quite well “the beetle sounds in the reed in Szczebrzeszyn” and a few other Polish sentences. He had a friend from Lublin who taught him to speak a little Polish. An amazing guy!
We visited several shops. There was an idea for sailing bags, but here they are more expensive than panniers. We were in a second-hand store, but the panniers were tragically damaged and incomplete.
Ashley, our host, tried to get us a discount in a big sports shop, but there decisions are made in the head office and the waiting time is a week or two.
Finally, we landed in a local shop and managed to arrange a good discount here. Boys in the shop The Bicycle Shop http://bikeshopak.com/ worried about our case. Thank you!
It rains, but on Monday we go!